In February of 2014, I signed up for John Holland and Sonia Choquette‘s, “Awaken Your Spirit” cruise. Little did I know, my life was about to change dramatically ~ my intuition was about to explode!

I boarded the plane home and took my aisle seat, barely noticing the man sitting by the window. Since the flight was full, I found it odd nobody was sitting in the center. Several minutes after take-off, the word “fish” entered my mind. I noticed it return several times and began to get annoyed at myself. The more I tried to stop it, the stronger it became. After fifteen minutes I gave up and turned to the man by the window.

“Excuse me, sir,” I politely spoke. “This may seem like a strange question, but do you fish?” “Why,” he replied. “Do I smell like a fish?” Of course not, I told him and went on to say I couldn’t get the word out of my head. He did say he visited his brother in the Keys and went fishing with him for two weeks. Hmmm…

We chatted the entire three hours to Philadelphia, and I soon discovered “fish” was the opening for me to help him become present. In short, he was worried about his adult children’s addictions and behaviors, and I mentioned mindfulness meditation might be helpful. As we landed, he asked me how he could find information on meditation. I smiled as I pulled out my new Mindful magazine and handed it to him.

What happened next is a beautiful illustration of how Go Within Yoga was manifested through my chakras.

As I drove home, an idea was formed in my stream of awareness, (chakra seven) and it moved down into my consciousness. The thought was a yoga studio with the name “Go Within Yoga.” This is the conception of the idea.  Next, I needed to check if it was aligned with my life purpose. Discovering the domain www.gowithinyoga.com was available was proof it was congruent with my intentions.

This led me to give substance to that intention using my imagination (chakra six) to visualize what the studio would look like when finished.

Then I stepped it down to the realm of communication (chakra five) when I told Fr. Bill and a few close friends about the idea. Fr. Bill told me to “go for it” and my friends offered their encouragement with their feedback. This step led me to the realm of relationships (chakra four), where I connected with others to work with; the people who installed my floor, mirrors, and blinds, those who would become clients and potential clients.

Using my will (chakra three), I began to move toward my goal. I have specific deadlines for the painting and various installations, as well as what I need to furnish and decorate the reception area of the studio. I take action and when obstacles appear, I overcome them.

Now, results can be seen, which drives my enthusiasm (chakra two). I know what items I want, ask for them, and attract what I need. They appear in front of me whenever I’m out. It fills me with enough excitement to keep my momentum going. My dream is coming into reality.

After I complete all the steps necessary (chakra one), my vision has now manifested into physical form.  I have created a new business that is in alignment with my life’s purpose and serves others. 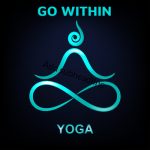 In essences, I have given birth to Go Within Yoga through my chakras!

If you want to learn more about manifesting through the chakras, connect with me on Facebook under Events.

Some of the material included in this post came from “Creating on Purpose,” by  Anodea Judith and Lion Goodman under the “fair use” rule of copyright law.

BE THE CHANGE – LET GO OF MONEY

ARE YOU LIVING IN THE PRESENT?